MAP Program Helps to Secure Relief from 25% Tariff on U.S. Dry Beans to the EU 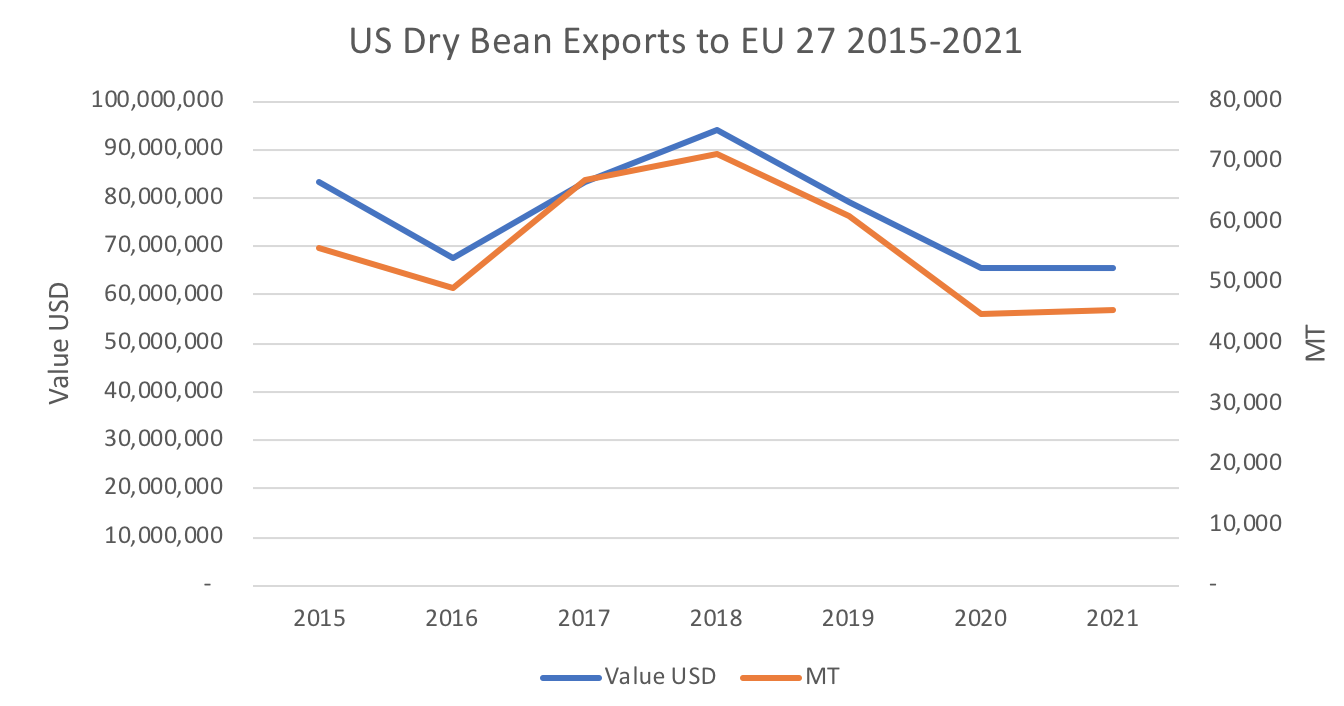 During the tariff’s application, U.S. exporters have lost millions in potential exports to the major growth region for plant-based proteins, including dry beans. Indeed, the reduction in U.S. exports to the EU is counter to the four-year trend since FY 2017 for increased demand for global dry bean imports to the EU27.  Import volumes in MT increased by 25.5% in the FY 2017 to FY 2020 period, as evident in the graph below. Though imports dropped sharply after 2020, this can likely be attributed to the ongoing supply chain and shipping issues. While the supply shortages in the U.S. in FY 2019 and, to some extent in FY 2021, resulting from inclement weather, have likely also factored into the US’s inability to capitalize on this growing demand, the tariff has weighed significantly on growth expectations as it has dissuaded importers in Europe from buying the U.S. and encouraged them to explore alternative origins to fill the demand, non-exhaustively including Canada, Argentina, and Ethiopia. While Canada has long been a competitor in the EU market due to similar quality, Argentina and Ethiopia have benefitted from the reduction in the price competitiveness of U.S. origin to establish business relationships with EU buyers, which has driven improvements in quality.

Utilizing MAP funding, the USDBC has been engaging with decision-makers in the EU’s Directorate General for Trade (DG TRADE) and major buyers of U.S. dry beans in the EU since June 2018.  The USDBC has consistently argued that the EU is substantially dependent on the U.S. for its supply of dry beans at the sufficient quality and, thus, that the impact of the 25% tariff has been felt by consumers. With negotiations all but frozen between the U.S. and EU under the previous U.S. Administration, the USDBC and other US industries that were impacted by the tariffs were the main actors lobbying the EU on the tariff issue and providing the data to showcase the disadvantage to the EU consumers caused by the tariffs.

As a result of repeated engagement by U.S. industries, the issue remained on the radar of EU officials who were fully briefed on the damaging effects of the tariffs on their own citizens. Therefore, once negotiations picked up again under the current U.S. Administration, the momentum had not been lost.  The EU and U.S. subsequently announced in October 2021 that the 25% tariff on U.S. dry beans would be temporarily suspended as of 1 January 2022 until 31 December 2023, as part of a wider deal to resolve the Section 232 dispute. The USBDC’s engagement with the European Commission using MAP funding was not the direct cause of the tariff removal, but its efforts were indirectly valuable in helping to keep the issue “top of mind” and educate EU policymakers on the tariff’s impact on the EU trade and consumers.

Removing the tariff temporarily means that U.S. dry beans can again compete on a level playing field with alternative origins and grow market share in a major growth market for plant-based proteins. However, there is still work for the USDBC and its trade partners in further policymaker education and communication to ensure that the EU fully removes the tariff as of 1 January 2024.