China has traditionally been one of the world’s largest exporters of dry beans, competing with U.S. suppliers in Southeast Asia, Latin America, and other major markets.  However, Chinese dry bean production has declined significantly in recent years as the government has placed increased emphasis on the production of larger volume of food and feed requirements, such as corn and soybeans.  China’s dry bean production is also hampered by limited research, access to quality seed and improved bean varieties, and a shortage of planting and harvesting equipment.

Although dry beans are not a staple in the Chinese diet, the large population, declining production, and growing interest in plant-based foods offer growing and attractive opportunities for U.S. dry bean exporters. 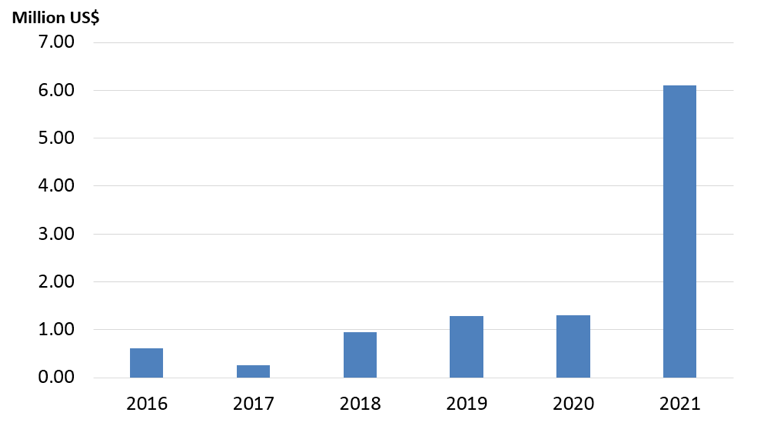 The U.S. Dry Bean Council (USDBC) is taking advantage of these opportunities by stepping up its marketing activities in China using ATP and MAP funding.   In 2021, purchases of U.S. dry beans as a result of USDBC’s recent marketing activities were reported by Chinese buyers at a total of 3,004 MT, valued at US$ 2,618,375.  More details on these purchases are:

BeanCon21 was an especially successful marketing activity for the USDBC in China.  This virtual event took place on March 1 – 5, 2021, and was attended by more than 400 attendees from 41 countries.  It involved plenary sessions on the U.S. dry bean crop, the U.S. value proposition, retail, food processing, and HRI innovation with U.S. dry beans.  More than 300 virtual business meetings between U.S. exporters and foreign buyers also took place, with 6 Chinese companies (including all of the above) involved in 45 private meetings with 20 U.S. exporters.

The U.S. Dry Bean Council is committed to further expanding its program in China to build U.S. sales and market share.  Future activities under discussion include: additional one-on-one business meetings between U.S. exporters and foreign buyers at future editions of BeanCon and the Worldwide Reverse Trade Mission, an increased presence at major trade shows in China, trade missions of suppliers from the U.S. to China, and an enhanced social media program to expand the awareness of Chinese consumers of the types and quality of U.S. dry beans.

USDBC promotional articles on the social media platform “We Chat”